‘Blood Brothers’ take two: still featuring the stellar vocals of Niki Evans and this time showcasing the voice of Marti Pellow as the Narrator, ‘Blood Brothers’ remains a heart-wrenchingly tragic tale of brothers separated by birth but united by fate. 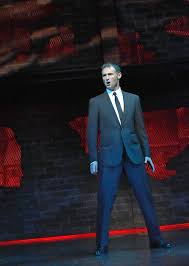 Having seen and reviewed this before, the focus lies on what was different about this telling of the tale of the Johnstone twins. Marti Pellow seems the obvious starting point: a Scouser he ain’t. I struggled to understand what he was saying sometimes because his accent was quite thick and at points indecipherable – I’d have definitely preferred him to ditch the Scouse in favour of being audible. That’s the only critique I can make about this Narrator though – he was intimidating, comforting and a constant lurking presence reminding us of the debt to be paid. In a weird way, Marti Pellow was an outstanding lurker: he never looked out of place, and constantly existed as a dark and menacing presence behind every twinge of happiness and friendship. His voice, as in his music and in a performance of ‘Jekyll and Hyde’ I had the pleasure of seeing him in, was astounding – he’s one of those rare pop musicians whose voice translates from CD to stage with ease, in fact I’d go as far as saying he’s better off out of the charts and treading the boards. He’s got a clear talent for manipulating his voice to suit the emotional rollercoaster that is ‘Blood Brothers’.

Niki Evans was, once more, fantastic. She has this uncanny ability to change from happy-go-lucky to ageing and troubled in a heartbeat whilst remaining hauntingly convincing. Her voice, without a doubt, was the best in the show: it’s so powerful that it’s beyond her X Factor roots, and was definitely meant to tell a story rather than belt out any old tune.

The only criticism I have to make about ‘Blood Brothers’ this time around was the sound choices. If it had been every now and then, I could have coped with reverb and echoes, but every song containing echoes was too much to deal with at points, and sometimes made the words hard to understand. It lost that haunting effect, and turned into a stage tool without meaning. It also made the singing sometimes seem like a competition: for instance, the Narrator and Mrs Johnstone’s duets were hugely complimentary to one another’s voices, but when that reverb hit it was like the Narrator faded and lost his significance in the face of Mrs Johnstone, when he is supposed to be the thread that ties the story together.

That aside, the opening night at the Hippodrome was a stunner. The highly translatable themes of family, social and emotional divides, and of inviable class systems deepened the tragedy felt by everyone in the Hippodrome. Besides those things mentioned above, ‘Blood Brothers’ remained as it I saw it in my original review: beautiful, haunting and tragically moving, and worth every tear shed.

One incredibly heartbreaking performance later, and I can’t wait for the next time I get to witness the immensely superb piece of theatre that is ‘Blood Brothers’.

The story is laid out before you by the Narrator (Robbie Scotcher), whose presence is a railing to control your experience, and build tension until the bitter end. Despite knowing the outcome before the origins, it didn’t stop every moment taunting you with its inevitability: it only heightened the climax to a point where you were crying just from knowing that the debt had to paid, and that walking on the cracks in the pavement would cost you more dearly than you could imagine. It sent shivers down my spine when he sang of hell knocking at the door, bringing the conclusion ever-closer by constantly quickening the pace.

Niki Evans was outstanding as Mrs Johnstone: she was able to go from Marilyn Monroe to aging mother in a matter of seconds, yet never lost her evident zeal for the performance. She never faltered and had a superb voice that was clearly wasted on the ‘X Factor’ – she was meant to be Mrs Johnstone. I was also amazed by Mickey (Sean Jones) and Eddie (Paul Davies) – both men convinced me I was watching them grow up, and not that I was watching two adults pretending to be children. They were absolutely perfectly in tune with one another, which broke your heart even more, because we could see their bond beyond was it was, yet they could never name this link as true brotherhood. Mickey in particular kept me on the edge of my seat, particularly the prison scene where his descent began, and alongside the Narrator kept you wondering about the ‘what if’s’ and ‘if only’s’ that frame Mickey’s final moments.

What I particularly liked about the storyline was that it didn’t entirely revolve around the unknown brothers fighting over Linda (Kelly-Anne Gower): it was entirely about love, and what both had lost and received, but Linda was more of a catalyst to the finale as opposed to the sole cause, highlighting the gulf over which the twins friendship lay through their tragic beginning. While Eddie is allowed to grow up in one direction, Mickey is pushed and pulled everywhere, by Sammy (Danny Taylor) and unemployment and his upbringing. Yet Eddie is sheltered through fear of him discovering the truth, and as Mrs Lyons (Tracy Spencer) rightly points out, this means he’s never been hers, and you don’t see the same loving relationship between those two develop as you do with Mrs Johnstone and the son she raised. Both want the life they couldn’t have, which should have been a life they could have shared.

The music was breathtaking – it was both lyrical and expanded on the story, as opposed to singing for the sake of it, and it all worked towards an end goal, as well as lulling us into the belief that life could still be fixed, until the Narrator’s ominous hellish repertoire broke the comfort you nearly felt. In this way, the music never allows you to sit in comfort, you are constantly battling your emotions and desperate to see how the blood brothers will discover the truth before the superstition becomes reality.

The only thing I would have like to have seen, but that was definitely not a minus on the story, was Mr Lyons coping with losing his son twice – once to a tragic accident, and once again when he discovered the truth behind his lineage. It would have been fascinating to see Mr Lyons devastation as well as Mrs Johnstones, but equally this could have detracted from the simple sentimentality that ruled her final embrace of both her sons. The final scene truly captured the entire devastation of the play, as the revelations and questions that go unanswered through the gunfire keep the audience reminiscing throughout the finale song. The haunting “tell me it isn’t true” genuinely makes you wish you could, that you could rewind and tell Mrs Johnstone that superstitions are only made real by the superstitious. Mickey’s final question of why it wasn’t him brings the play to a full circle, proving that the beginning was a genius means of reaching the end, which has only made me want to go back for more. The standing ovation was well-deserved, and if I could have applauded for longer I really would have.